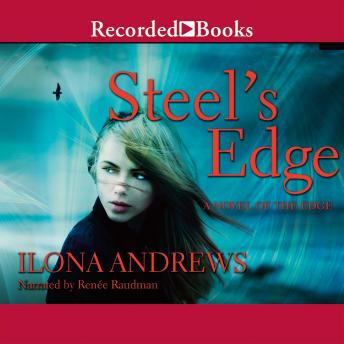 The Edge lies between worlds, on the border between the Broken, where people shop at Wal-Mart and magic is a fairy tale-- and the Weird, where blueblood aristocrats rule, changelings roam, and the strength of your magic can change your destiny Charlotte de Ney is as noble as they come, a blueblood straight out of the Weird. But even though she possesses rare magical healing abilities, her life has brought her nothing but pain. After her marriage crumbles, she flees to the Edge to build a new home for herself. Until Richard Mar is brought to her for treatment, and Charlotte' s life is turned upside down once again. Richard is a swordsman without peer, future head of his large and rambunctious Edger clan-- and he' s on a clandestine quest to wipe out slavers trafficking humans in the Weird. So when his presence leads his very dangerous enemies to Charlotte, she vows to help Richard destroy them. The slavers' operation, however, goes deeper than Richard knows, and even working together, Charlotte and Richard may not survive...