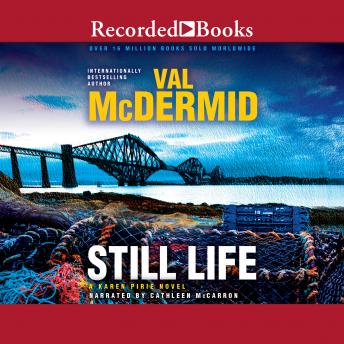 Hailed as the UK’s “Queen of Crime,” Val McDermid is the award-winning, internationally bestselling author of
more than thirty novels and one of the best crime writers working today. With Still Life, McDermid returns to her
propulsive series featuring cold case detective Karen Pirie, who finds herself investigating the shadowy world of forgery,
where things are never what they seem.

When a lobster fisherman on an early morning run pulls in his traps, he finds something he wasn’t expecting to
catch—a body. When police discover the dead man was the brother of a senior Scottish government official who
vanished without a trace, Detective Chief Inspector Karen Pirie takes over the investigation.

At the same time, a woman in the wealthy enclave of Perth is clearing out her sister’s home after a fatal road
accident and finds a mysterious camper van in the garage containing a skeletonized body. But who is it? And how
long has it been there? The two cases will draw DCI Pirie into the world of imposters, identity theft, and art forgery.
Meanwhile, the man responsible for the death of the love of Karen’s life is being released from prison, just as Karen
was getting back on her feet.

Intensely gripping from the first page, Still Life is further proof that McDermid is writing at the top of her game.
Longtime fans and new readers alike will find it hard to put down this tightly plotted thriller.