Still Me: A Novel 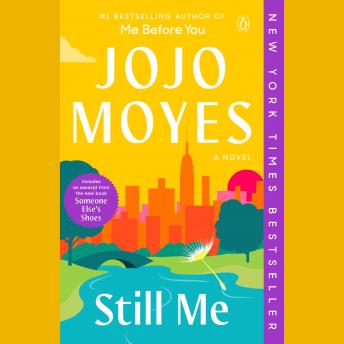 From the New York Times bestselling author of The Giver of Stars, discover the love story that captured over 20 million hearts in Me Before You, After You, and Still Me.

Louisa Clark arrives in New York ready to start a new life, confident that she can embrace this new adventure and keep her relationship with Ambulance Sam alive across several thousand miles. She steps into the world of the superrich, working for Leonard Gopnik and his much younger second wife, Agnes. Lou is determined to get the most out of the experience and throws herself into her new job and New York life.

As she begins to mix in New York high society, Lou meets Joshua Ryan, a man who brings with him a whisper of her past. Before long, Lou finds herself torn between Fifth Avenue where she works and the treasure-filled vintage clothing store where she actually feels at home. And when matters come to a head, she has to ask herself: Who is Louisa Clark? And how do you find the courage to follow your heart—wherever that may lead?

Funny, romantic, and poignant, Still Me follows Lou as she discovers who she is and who she was always meant to be—and learns to live boldly in her brave new world.

Still Me: A Novel