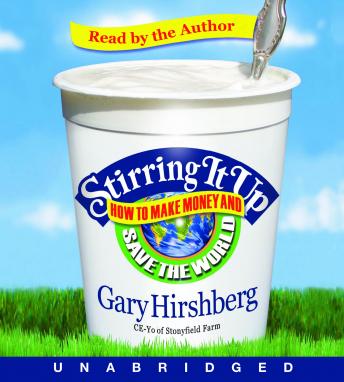 Stirring It Up: How to Make Money and Save the World

A true force for change, Gary Hirshberg has been at the forefront of movements working for environmental and social transformation for 30 years. From his early days as an educator and activist to his current position as President and CE-Yo of Stonyfield Farm, the world's largest organic yogurt company, Hirshberg's positive outlook has inspired thousands of people to recognize their ability to make the world a better place.

In Stirring It Up, Hirshberg calls on individuals to realize their power to effect change in the marketplace -- 'the power of one' -- while proving that environmental commitment makes for a healthier planet and a healthier bottom line. Drawing from his 25 years' experience growing Stonyfield Farm from a 7-cow start-up, as well as the examples of like-minded companies, such as Newman's Own, Patagonia, Wal-Mart and Timberland, Hirshberg presents stunning evidence that business not only can save the planet, but is able to simultaneously deliver higher growth and superior profits as well.

Hirshberg illustrates his points with practical information and advice, as well as engaging anecdotes from what he calls 'the bad old days' of his yogurt company: how a power outage left him milking cows by hand, how a dumpster fire revealed the need for better packaging, and his camel manure taste test challenge to a local shock jock. He also describes hands-on grassroots marketing strategies -- printing yogurt lids with provocative, politically charged messages, handing out thousands of free samples to subway commuters to thank them for using public transit, and devising the country's first organic vending machine -- explaining how these approaches make a much more powerful impact on consumers than traditional advertising.

An inspiring book for business owners and managers as well as anyone interested in saving the environment, Stirring It Up demonstrates how companies can work to save the planet, while achieving greater profits and satisfaction, and how we can all use the power of conscious consumption to encourage green corporate behavior.