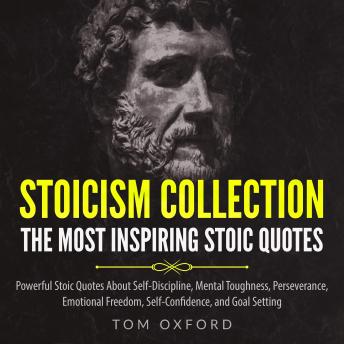 Is your life becoming shaped by your mistakes and bad habits? Do you feel shackled down, unable to let go of overwhelming emotions and painful thoughts? Then you need to keep reading...
The school of Stoicism was a Hellenistic philosophy founded in the 3rd Century BC. Throughout history, it has been a source of inspiration for some of the world’s greatest leaders, shaping some of the most brilliant minds ever known. Its teachings have been studied by American presidents, best-selling authors, and ground-breaking entrepreneurs – and its influence doesn’t end there. Even prisoners of war have ascribed their survival of pain and torture to the practice of Stoic philosophies.
In the Stoicism Collection of Quotes, you’ll discover:
• Sixty-one inspiring quotes from the most influential Stoic figure in history. (Feel INSTANTLY more confident, capable and at peace in your life!)
• Must-know facts about the four Greatest Stoic Philosophers of all time.
• Six spirit-lifting quotes from the father of Stoicism himself.
• Thirty-three empowering quotes from important figures you didn’t know were Stoic.
• The life-altering philosophies you must know for total mastery of your mind, emotions, and actions. Never lose control again!
• Over two-hundred other motivational sayings to inspire strength through pain, fear, death, and more. (You’ll find pearls of wisdom to get you through EVERY possible situation)
As a FREE bonus, you’ll also receive a free chapter from The Power of Mindfulness: Clear Your Mind and Become Stress Free because we truly believe that with mental clarity under your belt as well, you’ll be able to achieve anything.
To access the ancient wisdom used by the world’s finest minds and greatest leaders, scroll up and click ‘Add to Cart’ now.

This title is due for release on January 5, 2020
We'll send you an email as soon as it is available!