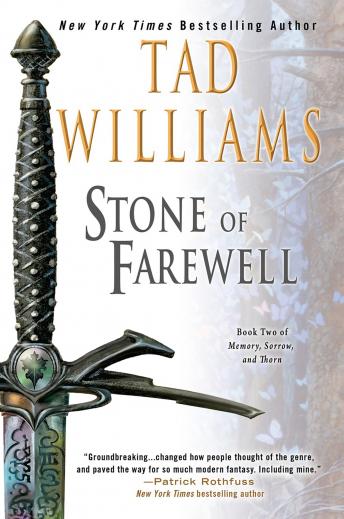 The Stone of Farewell: Book Two of Memory, Sorrow, and Thorn

“One of my favorite fantasy series.” —George R. R. Martin • “Groundbreaking.” —Patrick Rothfuss • “One of the great fantasy epics of all time.” —Christopher Paolini

Tad Williams introduced readers to the incredible fantasy world of Osten Ard in his internationally bestselling series Memory, Sorrow, and Thorn. The trilogy inspired a generation of modern fantasy writers, including George R.R. Martin, Patrick Rothfuss, and Christopher Paolini, and defined Tad Williams as one of the most important fantasy writers of our time.

It is a time of darkness, dread, and ultimate testing for the realm of Osten Ard, for the wild magic and terrifying minions of the undead Sithi ruler, Ineluki the Storm King, are spreading their seemingly undefeatable evil across the kingdom.

With the very land blighted by the power of Ineluki’s wrath, the tattered remnants of a once-proud human army flee in search of a last sanctuary and rallying point—the Stone of Farewell, a place shrouded in mystery and ancient sorrow.

An even as Prince Josua seeks to rally his scattered forces, Simon and the surviving members of the League of the Scroll are desperately struggling to discover the truth behind an almost-forgotten legend, which will take them from the fallen citadels of humans to the secret heartland of the Sithi—where near-immortals must at last decide whether to ally with the race of men in a final war against those of their own blood.

After the landmark Memory, Sorrow, and Thorn trilogy, the epic saga of Osten Ard continues with the brand-new novel, The Heart of What Was Lost. Then don’t miss the upcoming trilogy, The Last King of Osten Ard, beginning with The Witchwood Crown!

'Inspired me to write my own seven-book trilogy.... It’s one of my favorite fantasy series.'
—George R. R. Martin, New York Times-bestselling author of A Game of Thrones

'Groundbreaking...changed how people thought of the genre, and paved the way for so much modern fantasy. Including mine.'
—Patrick Rothfuss, New York Times-bestselling author of The Name of the Wind

'Tad Williams is a master storyteller, and the Osten Ard books are his masterpiece.' —Brandon Sanderson, New York Times-bestselling author of Mistborn

'Memory, Sorrow, and Thorn is one of the great fantasy epics of all time.'
—Christopher Paolini, New York Times-bestselling author of Eragon

Stone of Farewell: Book Two of Memory, Sorrow, and Thorn