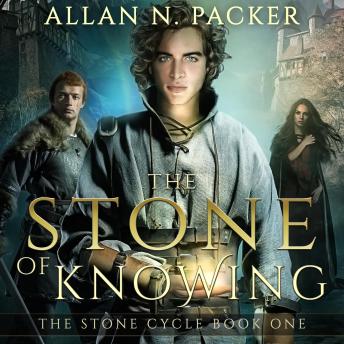 The Stone of Knowing

A talisman that unmasks thoughts, desires, deepest secrets. The fate of kingdoms depends on mastering its power and protecting it...

The untroubled world of young Thomas Stablehand is changed forever when he stumbles upon an unusual stone. With the thoughts and intents of others laid bare to him, he eagerly indulges his curiosity. But seeing into other minds isn’t like Thomas expected. And troubles are only beginning.

Invaders attack the kingdom of Arvenon, and Thomas has nowhere to turn except to his friend Will Prentis, a gifted and ambitious leader who has risen rapidly in the ranks of the king’s army.

Will is fearless, and where he leads men follow. With the kingdom on the brink, Will leads a small band on a perilous quest to thwart the invaders. Fearing his secret will be exposed, and hoping to help prevent catastrophe, Thomas flees with them.

But dangerous enemies seek the stone for their own ends. As Will faces a relentless opponent whose true purpose remains hidden, Thomas must decide what price he's willing to pay to protect the stone and preserve the kingdom.

If you enjoy epic fantasy with gripping action, relatable characters, and clean romance in a sweeping coming of age saga, then try the novels of The Stone Cycle now!

Note: The Stone of Knowing is Book 1 of The Stone Cycle, a multi-part saga. The first part of the ongoing tale concludes in Book 2, The Cost of Knowing.