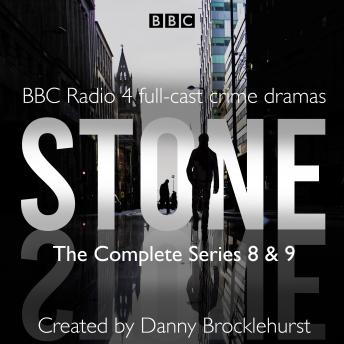 Series 8, Retribution: The Unravelling of a Murder, sees Stone grappling with grief after his wife's death, and struggling to look after his teenage daughter alone. DS Kelly, meanwhile, is preparing to get married, and feeling overwhelmed with wedding admin - but their personal lives are put on hold when the team is called to investigate a death at an inner-city hotel. How did respectable businessman Maxwell Foley come to fall from Room 608 - and why was he at the Beresford in the first place? To find out, Stone must navigate the murky, transient world of the hospitality industry... But as he comes closer to uncovering the truth, forces conspire to prevent past crimes from coming to light... Written by Martin Jameson and Richard Monks, this gripping drama features a full cast including Lizzie Stavrou (Hollyoaks) and Emma Cunniffe (Roadkill).

As Series 9, Protection, opens, DI Tanner has just had some life-changing news - while Stone gets a call from his daughter Alice, telling him she's been arrested. Meanwhile, their new investigation feels dangerously close to home. A teenager has been fatally stabbed, in what seems to be a totally unprovoked attack. The boy wasn't a known gang member, and his girlfriend Ruby claims she didn't recognise his killer. As the team search for leads, can they find out who was responsible before someone else gets hurt? This compelling drama was written by Vivienne Harvey, Carol Russell and Martin Jameson, and the cast includes Sydney Wade (I Kill Giants) and Angela Lonsdale (Our Girl).