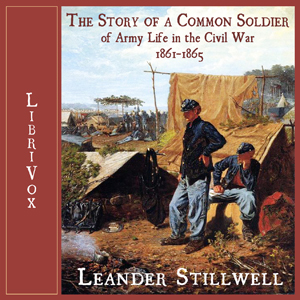 Leander Stillwell was an 18-year-old Illinois farm boy, living with his family in a log cabin, when the U.S. Civil War broke out. Stillwell felt a duty "to help save the Nation;" but, as with many other young men, his Patriotism was tinged with bravura: "the idea of staying at home and turning over senseless clods on the farm with the cannon thundering so close at hand . . . was simply intolerable." Stillwell volunteered for the 61st Illinois Infantry in January 1861. His youthful enthusiasm for the soldier's life was soon tempered at Shiloh, where he first "saw a gun fired in anger," and "saw a man die a violent death."

Stillwell's recounting of events is always vivid, personal, and engrossing. "I distinctly remember my first shot at Shiloh . . . The fronts of both lines were . . . shrouded in smoke. I had my gun at a ready, and was trying to peer under the smoke in order to get a sight of our enemies. Suddenly I heard someone in a highly excited tone calling to me from just in my rear, --'Stillwell! Shoot! Shoot! Why don't you shoot?' I looked around and saw that this command was being given by . . . our second lieutenant, who was wild with excitement, jumping up and down like a hen on a hot griddle. 'Why, lieutenant,' I said, 'I can't see anything to shoot at.' 'Shoot, shoot, anyhow!' 'All right,' I responded. . . And bringing my gun to my shoulder, I aimed low in the direction of the enemy, and blazed away through the smoke. But at the time the idea to me was ridiculous that one should blindly shoot into a cloud of smoke without having a bead on the object to be shot at."

The Story of a Common Soldier is a compelling coming of age tale that will appeal not only to Civil War buffs but to anyone who enjoys autobiographies. Written at the urging of his youngest son, when Stillwell was a mature man--a lawyer, judge, and member of the Kansas legislature, it combines graphic detail (provided by his war diary and letters written at the time to his family) with the insights of a thoughtful man looking back on those horrific times.(Summary by Sue Anderson)