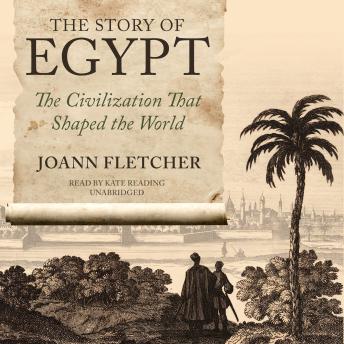 The Story of Egypt: The Civilization That Shaped the World

The story of the world's greatest civilization?spanning thousands of years?is full of epic stories, spectacular places, and an evolving society rich in inventors, heroes, villains, and pioneers.

The story of the world's greatest civilization spans four thousand years of history that has shaped the world. It is full of spectacular cities and epic stories of a constantly evolving society peopled with inventors, heroes and heroines, villains, artisans, and pioneers. Professor Joann Fletcher pulls together the complete story of Egypt, charting the rise and fall of the ancient Egyptians while putting their whole world into a context to which we can all relate.

Fletcher uncovers some fascinating revelations: new evidence shows that women became pharaohs on at least ten occasions and that the ancient Egyptians built the first Suez Canal and then circumnavigated Africa. From Ramses II's penchant for dying his grey hair to how we know that Montuhotep's chief wife bit her nails, Dr. Joann Fletcher brings alive the history and people of ancient Egypt as nobody else can. "A sweeping look at this epic history emphasizing the role of women rulers...Fletcher's delineation of the rise and fall of kingdoms, invasions by neighbors such as the Hyksos and Nubians, Persians and armies of Alexander the Great, all makes for a dense, elucidating narrative...The authoritative author imparts her vast knowledge in an orderly chronology and lively, intimate history. A perfect choice for budding Egyptologists."-Kirkus Reviews (starred review)

Story of Egypt: The Civilization That Shaped the World

This title is due for release on August 1, 2016
We'll send you an email as soon as it is available!