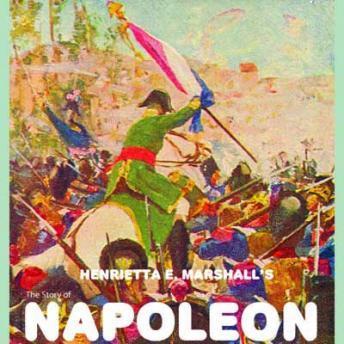 The Story of Napoleon

Henrietta Marshall's entertaining biography of this larger than life personality. She takes us through Napoleon's colorful life, from military campaigns to his solitary end on Elba. This story brings Napoleon to life, not just a caricature with hand held in jacket and an aloof look. He achieved much in his life, although not always.

Commendable or praiseworthy yet he is famous in the history of Europe for his deeds...or misdeeds.

AUTHOR
Henrietta Elizabeth Marshall (1867 - 1941) was a British author, most famous for her works of history for children.

For decades, Marshall's books were ubiquitous in schools and home libraries. Much of the popularity of her works stems from her talent for making history read like good storytelling.

COMMENTARY
Reviews for Alcazar AudioWorks' production of The Story of Napoleon
I hate to admit it, but I've never known much about the details of Napoleon's life. Oh, I knew the basics we all get from our general history readings, but this is the first time I've ever actually looked at his life as a whole. Wow! Whether you ""like"" him or not, this was one impressive man.

Also impressive are Henrietta E. Marshall's ability to write a fascinating story and David Thorn's skills at bringing that story to life. As I listened to Thorn's voice share incidents from Napoleon's childhood and tales about battles fought and won...and lost, I was drawn in, captivated, and educated.

As a homeschooling parent, I say that is a very good thing!
Reviewed By: Larissa McKay - EHO Eclectic Homeschool Online
"