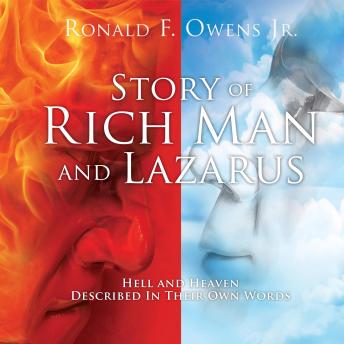 Story Of Rich Man And Lazarus: Hell and Heaven Described In Their Own Words

This 'Story of Rich Man and Lazarus: Hell and Heaven Described in Their Own Words' book is about the lives of a rich man and a homeless man and what happened to them in eternity after their respective deaths. This first-person account is based on 'a certain rich man' and 'a certain beggar named Lazarus' story, which Jesus Christ shared with His disciples in the Holy Bible's Gospel of Luke (16:19-31).
In Chapter 1, I describe how the rich man, 'A Certain Rich Man,' dressed, what he owned, who he socialized with, where he socialized, how he recreated, where he recreated, how his life was centered around himself, his sins, how he rejected the LORD and how he died. In Chapter 2, I describe how Lazarus, 'A Certain Homeless Man,' dressed, how he survived as a homeless man on the street, his poor choices, how a miraculous incident which caused Lazarus to finally rededicate his life to Jesus Christ and how he died. In Chapter 3, I describe what the 'Tormented Sinner' saw, what he feels/experiences in hell and the unspeakable agonies he suffers there, such as being separated from God's presence. In Chapter 4, I describe what the 'Comforted Saint' saw, what he feels/experiences in Heaven and the indescribable peace he experiences there, such as being warmed by God's presence.
This book is a story sharing with readers where not to go (hell) after death, where to go (Heaven) after dying, and how to get there (salvation through Jesus Christ).

Story Of Rich Man And Lazarus: Hell and Heaven Described In Their Own Words

This title is due for release on January 25, 2020
We'll send you an email as soon as it is available!