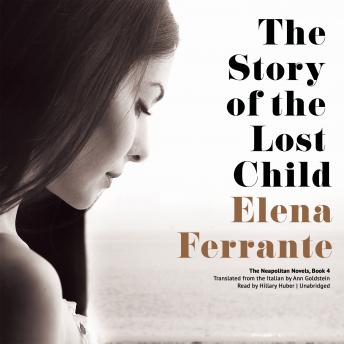 The Story of the Lost Child

#4 of The Neapolitan Novels

The Story of the Lost Child concludes the dazzling saga of two women—the brilliant, bookish Elena and the fiery, uncontainable Lila—who first met amid the shambles of postwar Italy.

In this book, life’s great discoveries have been made; its vagaries and losses have been suffered. Through it all, Elena and Lila’s friendship remains the gravitational center of their lives. Both women once fought to escape the neighborhood in which they grew up. Elena married, moved to Florence, started a family, and published several well-received books. But now, she has returned to Naples to be with the man she has always loved.

Lila, on the other hand, never succeeded in freeing herself from Naples. She has become a successful entrepreneur, but her success draws her into closer proximity with the nepotism, chauvinism, and criminal violence that infect her neighborhood. Yet, somehow, this proximity to a world she has always rejected only brings her role as unacknowledged leader of that world into relief.

I read all four books. I felt the story could be fully told of the people and history with far less redundancy and minutiae. Finally at the end, I had the sense the author just wanted the ability to sell more books.

The books are terrific. The narrator mostly does a good job but the way she does the voices of children and teenagers later in the story is just unbearable. She didn’t do it when the main characters where young, but she starts doing it for the second generation in the book’s narrative. She presents all the kids’ dialogue in book 4 as whining and then the teenagers talk like valley girls. I can’t even believe that anyone thought that was okay. It didn’t quite ruin the audiobook for me but it drove me nuts.