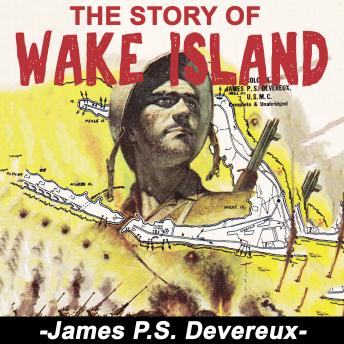 The Story of Wake Island

On December 8th, 1941, just hours after the attack on Pearl Harbor, 36 Japanese bombers attacked Wake Island and destroyed eight of its 12 aircraft.
Two more raid shortly followed, further reducing the defensive possibilities for the men who were left to defend this small area of American soil in the center of the Pacific Ocean.
Major James P. S. Devereux was the Commanding Officer of the first Marine Defense Battalion who faced Japanese onslaught.
The first Japanese landing attempt on the morning of December 11th was repelled by a ferocious defense put forward by Devereux and his men.
Yet, although the Japanese had withdrawn without landing, they continued to bombard the island by air and sea, and there was little hope of resupply for the Americans.
For 15 days the American troops suffered endless bombardments until the second major Japanese offensive was launched on December 23rd.
Against overwhelming forces the Marines and other troops that were stationed on the island fought valiantly, but after 49 men had lost their lives in the fight, the remaining American men and civilians were captured by the Japanese.
.James P. S. Deveraux's remarkable book The Story of Wake Island takes the listener to the heart of the action from the point of view of the commanding officer. It is a brilliant account of this tragic event that demonstrated the fighting spirit of the American soldier even in the face of unbeatable odds.
James P. S. Devereaux was a United States Marine Corps general, Navy Cross recipient, and Republican congressman. After the ferocious 15-day battle of Wake Island Devereux was interned for nearly four years in Japanese prison camps. His book The Story of Wake Island was first published in 1947 and he passed away in 1988.