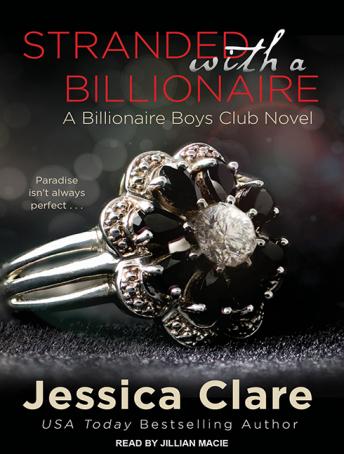 Stranded with a Billionaire

He's had a rough time after the death of his father and the betrayal of his fiancee. But with a visit to a recent business acquisition-a private island resort in the Bahamas-he has a chance to mend his broken heart.

When a hurricane blows in, a misplaced passport and a stalled elevator bring Logan together with an unusual woman named Bronte. She's unlike anyone he's ever met-down to earth, incredibly sensual, and even quotes Plato.

She also has no clue that he's rich...

Bronte Dawson, a waitress from the Midwest, is stranded with the hotel's domineering yet sexy manager Logan. What's the harm in a little fling when it's just the two of them, alone in paradise? But after several steamy island nights in Logan's arms, Bronte's ready to give her heart-and her body-to the man in charge.

But she soon discovers there's more to Logan than he's told her . . . a billion times more. Now, Bronte's caught in a whirlwind affair with one of the world's most powerful men. But can their love endure their differences or will it all just blow over?

This is one of a very few series I will reread or listen to. So good.

This book was so boring, there was no plot and it was very predictable. I stop listening after a couple of chapters.

Awful! It seemed like a copycat of Fifty Shades of Grey without the bondage. 3/4 of the book tried to titillate with descriptions of hot sex between the 2 protagonists. There was no plot, no character development & no reason to waste time on this book or any others in the series. Skip it at all costs!!

terrible! no plot. could not finish this book! i can't recommend

The story had a little more substance to it than most. The sweet and sexy parts were well done but it wasn't a book that I simply couldn't put down. Narration could have been better as her high pitched, youthful voice didn't translate well to male voices. Would recommend that you take a listen before purchasing as it definitely made a difference in how much I liked the book.