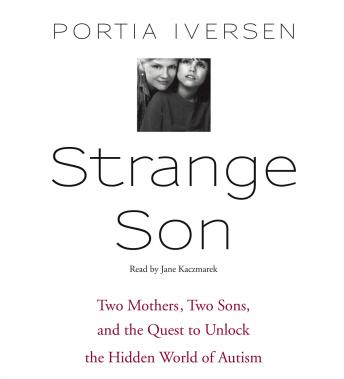 Strange Son: Two Mothers, Two Sons, and the Quest to Unlock the Hidden World of Autism

The uplifting true story of two mothers from opposite sides of the world united to help their sons.

Portia Iversen's life was turned upside down when her two-year-old son Dov was diagnosed with autism. Desperate to find a treatment, Portia was shocked to learn that almost nothing was known about the disorder, which only a handful of researchers were studying.

When Portia heard of a severely autistic nonverbal boy in India whose mother had taught him to read and write, she arranged for mother and son to visit the United States to help researchers understand what can be learned from their success. Soma Mukhopadhyay's achievement was truly astonishing: not only could her son Tito communicate, but he had an IQ of 185 and wrote beautiful poetry. Her revolutionary teaching method allowed Tito to explain the startling differences in his sensory perception, offering scientists an unrivaled window into the autistic mind.

Part memoir, part detective story, Strange Son is the captivating account of these families' extraordinary journeys, an inspiring tale of the power of two mothers' determination to find hope where there was once only despair.

Strange Son: Two Mothers, Two Sons, and the Quest to Unlock the Hidden World of Autism

This title is due for release on December 28, 2006
We'll send you an email as soon as it is available!