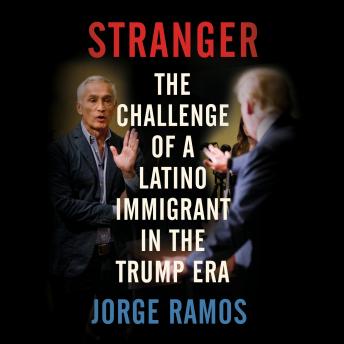 Stranger: The Challenge of a Latino Immigrant in the Trump Era

“There are times when I feel like a stranger in this country. I am not complaining and it’s not for lack of opportunity. But it is something of a disappointment. I never would have imagined that after having spent thirty five years in the United States I would still be a stranger to so many. But that’s how it is”.

Jorge Ramos, an Emmy award-winning journalist, Univision’s longtime anchorman and widely considered the “voice of the voiceless” within the Latino community, was forcefully removed from an Iowa press conference in 2015 by then-candidate Donald Trump after trying to ask about his plans on immigration.

In this personal manifesto, Ramos sets out to examine what it means to be a Latino immigrant, or just an immigrant, in present-day America. Using current research and statistics, with a journalist’s nose for a story, and interweaving his own personal experience, Ramos shows us the changing face of America while also trying to find an explanation for why he, and millions of others, still feel like strangers in this country.

“It is precisely this pattern of confrontation… that has won Ramos the trust of so many Hispanics. They know that in many countries south of the United States, direct questions can provoke not simply a loss of access but also a loss of life.” --Marcela Valdes, The New York Times

Stranger: The Challenge of a Latino Immigrant in the Trump Era