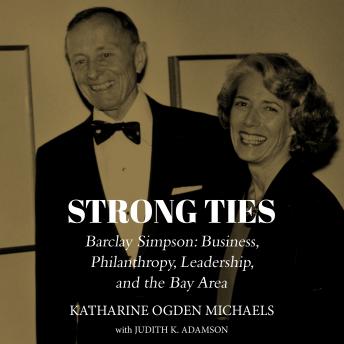 An in-depth look at the life of Oakland, California native, Barclay Simpson, Strong Ties focuses on the set of convictions and leadership qualities that allowed Simpson to build a successful business from nothing and to become one of the major philanthropists in the San Francisco Bay Area. Simpson founded Simpson Manufacturing Co, Inc., in 1956, which he grew from a small, artisan business that fabricated metal connectors into a world-wide, publicly-traded company, known throughout the construction industry as a manufacturer of over 4000 distinct, highly engineered products for tying one structural element to another in residential and commercial projects.

In building the company, he developed a set of company principles that placed employees at the center of his business. Central to these principles was a compensation system that included broad-based, quarterly profit-sharing along with employee development and education programs that promoted hiring from within the ranks of the company, thereby allowing employees to build life-long careers in which many were able to go from hourly production line labor to management.

A story of Barclay Simpson's leadership style as both a business man and a philanthropist, Strong Ties chronicles the astounding continuity between his views on making money, and giving it away.