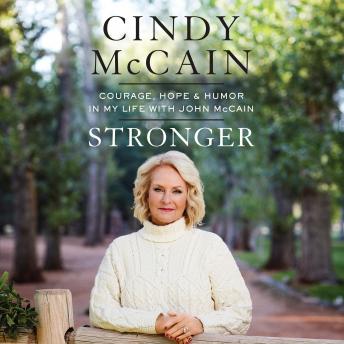 Stronger: Courage, Hope, and Humor in My Life with John McCain

In Stronger, the widow of Senator John McCain opens up about her beloved husband, their thirty-eight-year marriage, and the trials and triumphs of a singular American life.

My husband, John McCain, never viewed himself as larger than life—but he was. He had more tenacity and resolve than anybody I ever met. Being with him didn’t hold me back—it gave me flight, a courage I never would have felt on my own.

Cindy Hensley was just out of college when she met and fell in love with the celebrated Navy hero John McCain. They embarked on a thrilling life together that put her at the center of American politics for over four decades. Stronger, her moving and inspiring memoir, tells the story of her adventurous life with John for the first time.

Raising their four children in Arizona while John flourished as a six-term senator in Washington, D.C., Cindy McCain brought her own flair to the role of political wife. She eagerly supported John’s career even as she tried hard to stay out of the spotlight and maintain her own health and well-being. In Stronger, she is honest in revealing her own successes and missteps, discussing how she dealt with political attacks targeting her children, her battle with opioid addiction, and the wild whirl of campaigning for president.

As they built their life together, Cindy and John continued the multi-generation McCain tradition of service to country. With both immense pride and deep worry, she sent two sons off to active duty in the military. She describes her own brave efforts bringing medical support to countries in crisis and empowering women in Africa and around the world. And she reveals her feelings about the tumultuous effects of the Trump presidency on the military.

Most important, this book shares how John’s humor and strength helped Cindy grow into the confident woman she is now. More than a political story, Stronger is the unforgettable journey of one woman who believes in family, honor, and country—and is willing to stand up for all of them.

Stronger: Courage, Hope, and Humor in My Life with John McCain