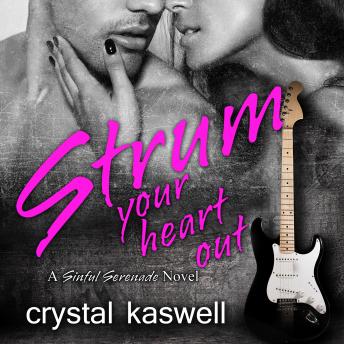 Strum Your Heart Out

College senior Kara Kendrick is not about to let lust ruin a good friendship. Yes, her rock star guitarist best friend Drew Denton is stubborn, guarded, and quick to threaten violence on anyone who hurts her. He's also trustworthy, protective, and several degrees hotter than the sun.

When Kara gets kicked out of her apartment, Drew insists she move in with him. But her crush isn't quite so manageable with him sweating through his push-ups. Or stepping out of the shower clad in only a towel. Or tackling her on the bed, tickling her to make her confess.

There's no way they can be together. Not if she wants to keep her secrets. No matter how much her body begs her to throw herself on his bed, no matter how desperately she wants to rip off his v-neck and rake her hands over his defined torso, Kara is staying just friends with Drew.

Until she's not. Until they're kissing and touching and about to do something that will change their friendship forever . . .

Strum Your Heart Out