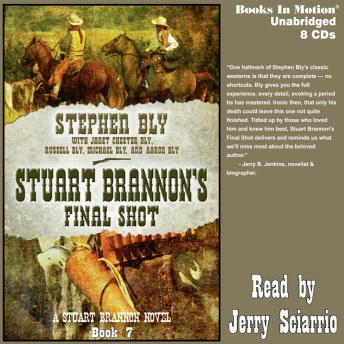 IT TOOK A PERSONAL REQUEST FROM PRESIDENT TEDDY ROOSEVELT TO PUT STUART BRANNON BACK IN ACTION.

In 1905, at 58 years old, legendary lawman Stuart Brannon – now a rancher and widower – had no intention of leaving his beloved Arizona Territory to attend the Lewis and Clark Centennial Exposition in Portland, Oregon, nor to participate in the celebrity golf tournament for the Willamette Orphan Farm. Even an emotional appeal for a longtime friend didn’t persuade him. His life no longer consisted of bloodthirsty men to track down… people trying to kill him… lawless gangs preying on the innocent. Then the telegram came: Stuart, I need you in Portland. Tim Wiseman is missing. I think there’s a cover-up going on. Tell folks you’re going to the Exposition. Nose around. Find out how a U.S. Marshal can disappear and no one knows why. I’ll contact you there. T.R. No way could Stuart Brannon refuse a personal request from the President of the United States. Filled with humor and heart, adventure and romance, “Stuart Brannon’s Last Shot” is the story of a man who embodied the Code of the West.