Student Resistance in the Age of Chaos Book 1, 1999 - 2009: Globalization, Human Rights, Religion, War, and the Age of the Internet 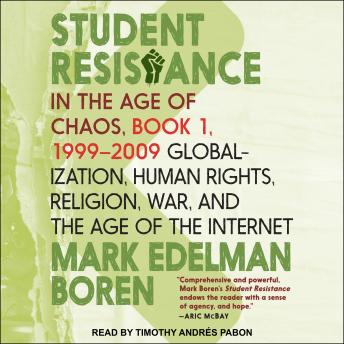 Student resistance in the first decade of the twenty-first century was the single most powerful liberating force around the globe during those years. Challenging governments-in a few cases, overturning governments-at a time when representational democracies appeared weak and authoritarian regimes were on the rise. In Student Resistance in the Age of Chaos, Book 1, Mark Boren goes continent by continent, country by country, to show us the contours of the new frontlines of resistance, the sacrifices that were made, the seismic changes caused by the Internet, and the new powers of surveillance and military technology that governments across the globe used to monitor and suppress student groups, raising the stakes and the human cost of resistance in many countries.

Student Resistance in the Age of Chaos, Book 1, takes us forward into the eventful first decade of the new century. As Mark Boren writes in the book, 'Student resistance throws into relief the relationships within our societies between the rulers and the people. It defines cultural moments and indicates the directions in which nations are heading. And if student activism has a rich and storied past, it is just as true that student movements are shaping the world more than they ever have before.'

Student Resistance in the Age of Chaos Book 1, 1999 - 2009: Globalization, Human Rights, Religion, War, and the Age of the Internet