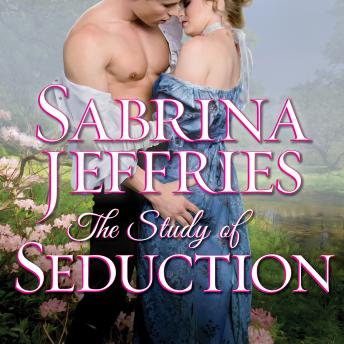 The Study of Seduction

When Edwin Barlow, the Earl of Blakeborough, agrees to help his best friend's impetuous ward, Lady Clarissa Lindsey, in her time of need, he knows that he's in for trouble. He's been hunting for someone to wed, and she'll just get in the way. Although captivated by the witty, free-spirited beauty, he fears that she'd be all wrong as a wife . . . if she would even take such a gruff cynic for her husband. Yet he wants nothing more than to have her for his own.

Clarissa has no intention of marrying anyone-not Edwin, whom she's sure would be an overbearing husband, and certainly not the powerful French diplomat stalking her. But when matters escalate with the diplomat, she chooses Edwin's gallant offer of a marriage between friends in hopes that it will deter her stalker. She expects nothing more than an amiable union, but their increasingly tempestuous kisses prove more than she bargained for. When her stalker's vow to expose the lovers' deepest secrets threatens to destroy their blossoming attraction, will their tenuous bond withstand public ruin, or will Edwin lose all that's important to him to protect his bride?Contains mature themes.