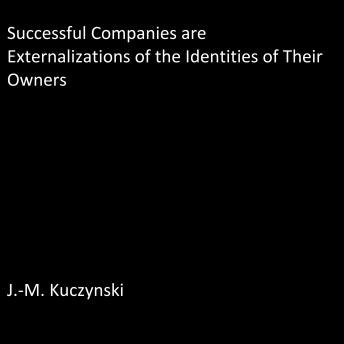 Successful Companies are Externalizations of the Identities of their Owners

Harlan Sanders was a chef whose company (Kentucky Fried Chicken)makes food. Bill Gates was a computer scientist whose company (Microsoft) makes computer-software. Henry Ford was an automaker whose company (Ford Motors) makes cars. A company is successful when it externalizes the identity of its owner. A company is successful when it is its owner's identity---when, in other words, it is its owner's identity externalized. Business-success therefore isn't about coming up with a clever idea: it is about knowing how to be oneself and get paid for it.

Successful Companies are Externalizations of the Identities of their Owners

This title is due for release on December 20, 2017
We'll send you an email as soon as it is available!