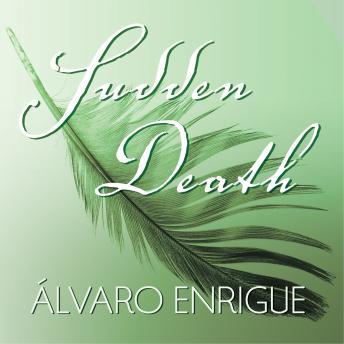 Sudden Death begins with a brutal tennis match that could decide the fate of the world. The bawdy Italian painter Caravaggio and the loutish Spanish poet Quevedo battle it out before a crowd that includes Galileo, Mary Magdalene, and a generation of popes who would throw Europe into the flames. In England, Thomas Cromwell and Henry VIII behead Anne Boleyn, and her crafty executioner transforms her legendary locks into the most sought-after tennis balls of the time. Across the ocean in Mexico, conquistador Hernán Cortes and his Mayan translator and lover, La Malinche, scheme and conquer, not knowing that their domestic comedy will change the world. And in a remote Mexican colony a bishop reads Thomas More's Utopia and thinks that instead of a parody, it's a manual.

In this mind-bending, prismatic novel, worlds collide, time coils, traditions break down. There are assassinations and executions, hallucinogenic mushrooms, utopias, carnal liaisons and papal dramas, artistic and religious revolutions, love stories and war stories. A dazzlingly original voice and a postmodern visionary, Álvaro Enrigue tells a grand adventure of the dawn of the modern era in this short, powerful punch of a novel.