The Sugar King of Havana: The Rise and Fall of Julio Lobo, Cuba's Last Tycoon 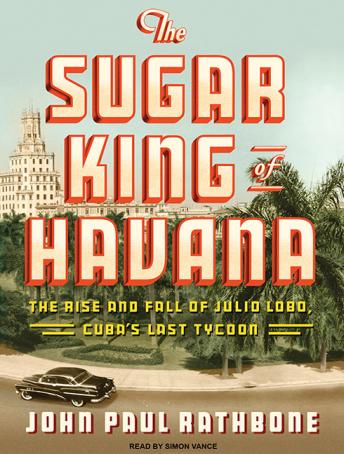 Fifty years after the Cuban revolution, the legendary wealth of the sugar magnate Julio Lobo remains emblematic of a certain way of life that came to an abrupt end when Fidel Castro marched into Havana. Known in his day as the King of Sugar, Lobo was for decades the most powerful force in the world sugar market, controlling vast swaths of the island's sugar interests. Born in 1898, the year of Cuba's independence, Lobo's extraordinary life mirrors, in almost lurid technicolor, the many rises and final fall of the troubled Cuban republic.

The details of Lobo's life are fit for Hollywood. He twice cornered the international sugar market and had the largest collection of Napoleonica outside of France, including the emperor's back teeth and death mask. He once faced a firing squad only to be pardoned at the last moment, and he later survived a gangland shooting. He courted movie stars from Bette Davis to Joan Fontaine and filled the swimming pool at his sprawling estate with perfume when Esther Williams came to visit.

As Rathbone observes, such are the legends of which revolutions are made and later justified. But Lobo was also a progressive and a philanthropist, and his genius was so widely acknowledged that Che Guevara personally offered him the position of minister of sugar in the Communist regime. When Lobo declined-knowing that their worldviews could never be compatible-his properties were nationalized, most of his fortune vanished overnight, and he left the island, never to return to his beloved Cuba.

Financial Times journalist John Paul Rathbone has been fascinated by this intoxicating, whirligig, and contradictory prerevolutionary period his entire life. His mother was also a member of Havana's storied haute bourgeoisie and a friend of Lobo's daughters. Woven into Lobo's tale is her family's experience of republic, revolution, and exile, as well as the author's own struggle to come to grips with Cuba's-and his family's-turbulent history.

Prodigiously researched and imaginatively written, The Sugar King of Havana is a captivating portrait of the glittering end of an era, but also of a more hopeful Cuban past, one that might even provide a window into the island's future.