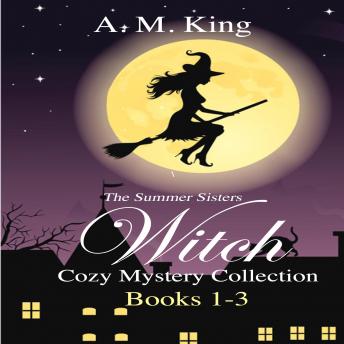 The Summer Sisters Witch Cozy Mystery Collection: Books 1-3
Witch Happens
Some people come from a long family line of lawyers, doctors, teachers and even cops. Febe just found out she comes from a long line of...witches!
Febe Summer is not having a good day. Or a good year, for that matter.  She lost her fiancé, her job, and her apartment all in one day-on her 25thbirthday! Talk about the worst. Birthday. Ever!
She's jobless, penniless and soon to be...homeless.
Will she be able to rebound and pick herself up again?
Oh, and she just found out, thanks to a dark family secret, that she's not who she thought she was. She's a witch! And she's not allowed to practice magic-yet.
When she moves back to her small hometown of Blackshore Bay, there's more family drama than she can handle. Her aunties are out of control, her sister is being secretive and someone has murdered the malicious town gossip. Will she be able to find out whom, before it's too late?
Life's a Witch
Being a witch is a lot more complicated than it looks.
Febe's just getting used to her magical powers and needs to pass a few tests before she is fully licensed to practice magic without restrictions. But after the murder of someone close to her, she becomes the prime suspect.
Can she clear her name in time and find the real killer-with a little help from magic?
Witch You Were Here
After years of dating Mr. Wrong, Febe's finally met Mr. Right. Trouble is, she can never tell him she's a witch.
Will that change everything between them if he finds out?
Meanwhile, Mr. Dawes, her creepy neighbor's real identity is revealed. A suspicious death during the Blackshore Bay's Festival of Witchesto celebrate the 326-year anniversary of the end of the Salem witch trials, is written off as an accident.
But Febe knows differently. There's a killer on the loose-and they're so good, he or she is making the deaths look natural. Now Febe is racing against the clock to prove a crime has been committed-before the killer strikes again.
The Summer Sisters Witch Cozy Mystery series:
Witch Happens (Book 1)
Life's a Witch (Book 2)
Witch You Were Here (Book 3)
Witchful Thinking (Book 4) *coming soon