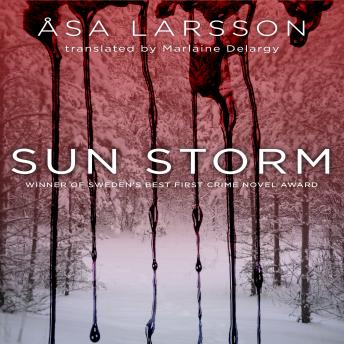 On the floor of a church in northern Sweden, the body of a man lies mutilated and defiled-and in the night sky, the aurora borealis dances as the snow begins to fall . . . So begins Åsa Larsson's spellbinding thriller, winner of Sweden's Best First Crime Novel Award and an international literary sensation.

Rebecka Martinsson is heading home to Kiruna, the town she'd left in disgrace years before. A Stockholm attorney, Rebecka has a good reason to return: her friend Sanna, whose brother has been horrifically murdered in the revivalist church his charisma helped create. Beautiful and fragile, Sanna needs someone like Rebecka to remove the shadow of guilt that is engulfing her, to forestall an ambitious prosecutor and a dogged policewoman. But to help her friend, and to find the real killer of a man she once adored and is now not sure she ever knew, Rebecka must relive the darkness she left behind in Kiruna, delve into a sordid conspiracy of deceit, and confront a killer whose motives are dark, wrenching, and impossible to guess.