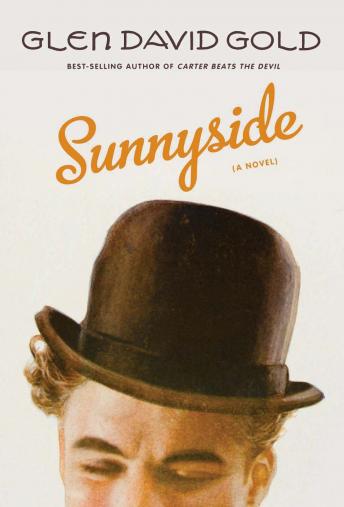 Glen David Gold, author of the best seller Carter Beats the Devil, now gives us a grand entertainment with the brilliantly realized figure of Charlie Chaplin at its center: a novel at once cinematic and intimate, heartrending and darkly comic, that captures the moment when American capitalism, a world at war, and the emerging mecca of Hollywood intersect to spawn an enduring culture of celebrity.

Sunnyside opens on a winter day in 1916 during which Charlie Chaplin is spotted in more than eight hundred places simultaneously, an extraordinary delusion that forever binds the overlapping fortunes of three men: Leland Wheeler, son of the world’s last (and worst) Wild West star, as he finds unexpected love on the battlefields of France; Hugo Black, drafted to fight under the towering General Edmund Ironside in America’s doomed expedition against the Bolsheviks; and Chaplin himself, as he faces a tightening vise of complications—studio moguls, questions about his patriotism, his unchecked heart, and, most menacing of all, his mother.

The narrative is as rich and expansive as the ground it covers, and it is cast with a dazzling roster of both real and fictional characters: Mary Pickford, Douglas Fairbanks, Adolph Zukor, Chaplin’s (first) child bride, a thieving Girl Scout, the secretary of the treasury, a lovesick film theorist, three Russian princesses (gracious, nervous, and nihilist), a crew of fly-by-the-seat-of-their-pants moviemakers, legions of starstruck fans, and Rin Tin Tin.

By turns lighthearted and profound, Sunnyside is an altogether spellbinding novel about dreams, ambition, and the dawn of the modern age.