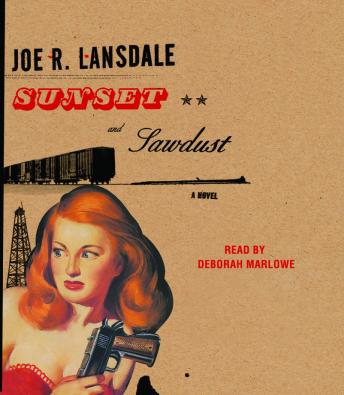 He has been called “hilarious . . . refreshing . . . a terrifically gifted storyteller with a sharp country-boy wit” (Washington Post Book World), and praised for his “folklorist’s eye for telling detail and [his] front-porch raconteur’s sense of pace” (New York Times Book Review). Now, Joe R. Landsdale gives us a fast-moving, electrifying new novel: a murder mystery set in a steamy backwater of Depression-era East Texas.
It begins with an explosion: Sunset Jones kills her husband with a bullet to the brain. Never mind that he was raping her. Pete Jones was constable of the small sawmill town of Camp Rapture (“Camp Rupture” to the local blacks), where no woman, least of all Pete's, refuses her husband what he wants.

So most everyone is surprised and angry when, thanks to the unexpected understanding of her mother-in-law—three-quarter owner of the mill—Sunset is named the new constable. And they're even more surprised when she dares to take the job seriously: beginning an investigation into the murder of a woman and an unborn baby whose oil-drenched bodies are discovered buried on land belonging to the only black landowner in town. Yet no one is more surprised than Sunset herself when the murders lead her—through a labyrinth of greed, corruption, and unspeakable malice—not only to the shocking conclusion of the case, but to a well of inner strength she never knew she had.

Landsdale brings the thick backwoods and swamps of East Texas vividly to life, and he paints a powerfully evocative picture of a time when Jim Crow and the Klan ruled virtually unopposed, when the oil boom was rolling into and over Texas, when any woman who didn't know her place was considered a threat and a target. In Sunset, he gives us a woman who defies all expectations, wrestling a different place for herself with spirit and spit, cunning and courage. And in Sunset and Sawdust he gives us a wildly energetic novel—galvanizing from first to last.

This title is due for release on December 16, 2003
We'll send you an email as soon as it is available!