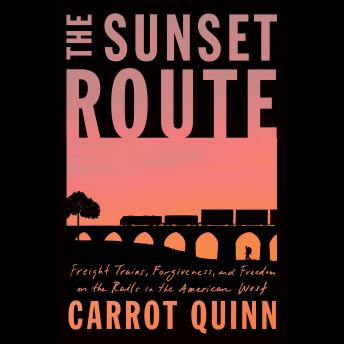 The Sunset Route: Freight Trains, Forgiveness, and Freedom on the Rails in the American West

The unforgettable story of one woman who leaves behind her hardscrabble childhood in Alaska to travel the country via freight train—a beautiful memoir about forgiveness, self-discovery, and the redemptive power of nature, perfect for fans of Wild or Educated.

NAMED ONE OF THE BEST BOOKS OF THE YEAR BY THE PHILADELPHIA INQUIRER • “An urgent read. A courageous life. Quinn’s story burns through us and bleeds beauty on every page.”—Noé Álvarez, author of Spirit Run: A 6,000-Mile Marathon Through North America’s Stolen Land

After a childhood marked by neglect, poverty, and periods of homelessness, with a mother who believed herself to be the reincarnation of the Virgin Mary, Carrot Quinn moved out on her own. She found a sense of belonging among straight-edge anarchists who taught her how to traverse the country by freight trains, sleep in fields under the stars, and feed herself by foraging in dumpsters. Her new life was one of thrilling adventure and freedom, but still she was haunted by the ghosts of her lonely and traumatic childhood.

The Sunset Route is a powerful and brazenly honest adventure memoir set in the unseen corners of the United States—in the Alaskan cold, on trains rattling through forests and deserts, as well as in low-income apartments and crowded punk houses—following a remarkable protagonist who has witnessed more tragedy than she thought she could ever endure and who must learn to heal her own heart. Ultimately, it is a meditation on the natural world as a spiritual anchor, and on the ways that forgiveness can set us free.