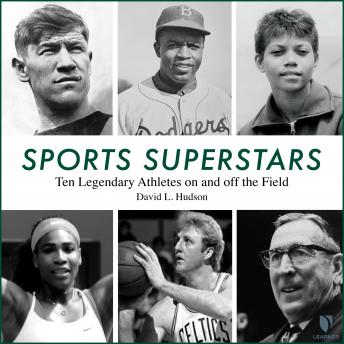 Superstar Heroes: How 10 Athletes Inspired Greatness in Sports and Life

Get to know the individuals behind some of the historic moments in sports that sent a shiver down our collective spine. Your presenter in this 12-part audio series is Professor David Hudson, an award-winning teacher, leading expert on sports history, and championship boxing judge.

Through these captivating lectures, you'll meet the audacious Muhammad Ali, who defied the United States government by standing up for his religious beliefs even though it cost him his heavyweight crown at his fistic peak. You'll spend time with Wilma Rudolph, who defied expectations by overcoming childhood polio to become the fastest woman in the world.

Other featured figures are noteworthy not only for their athletic prowess but also for their longevity and sphere of influence. In the lecture on Chicago Bulls phenom Michael Jordan, you'll meet the man who set a ten-year NBA scoring record, revolutionized the sportswear industry, and inspired a documentary commanding a viewership of 5.6 million.

Did you know that Babe Didrikson Zaharias was the only track-and field athlete ever to take home individual medals in an Olympic running, throwing, and jumping event? Or that Serena Williams won more Grand Slam singles titles than any other person during the open era?

Learn more fascinating facts like these as you spectate from a new vantage point with Prof. Hudson today.

Superstar Heroes: How 10 Athletes Inspired Greatness in Sports and Life

This title is due for release on June 22, 2020
We'll send you an email as soon as it is available!