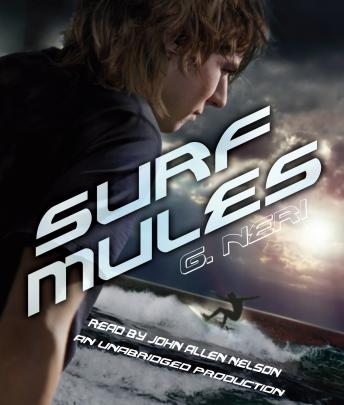 PMW–Perfect Monster Wave. It could be the answer to all Logan’s problems. He could ride it and figure out what to do about his deadbeat dad, who turned out to be a major loser. He could figure out how to help his mom out of the financial jam his dad put her in. He could decide whether going to college and forsaking the wave and the surfer’s life are really what he wants to do. He could even forgive his former best friend, Fin, for being the greatest surfer Hermosa Beach has ever seen. The Perfect Monster Wave. But when it comes, Logan doesn’t expect to see Fin riding it. He also doesn’t expect Fin to die riding it. Logan didn’t even know anyone his age could die. Suddenly his world is in a tailspin, but his faithful bud, Z-boy, may have the answer for Logan–a summer job muling illegal cargo cross-country.

While Logan knows it’s not the smartest thing to do, it does seem like the only thing to do. A road trip could be just what he needs to clear his head and make some quick cash. But with Z-boy’s constant screwups, a band of Nazi surfers out for blood and a mysterious stranger on their tail, Logan is starting to have some serious doubts about this summer job, and wonders if he’ll even make it home alive.