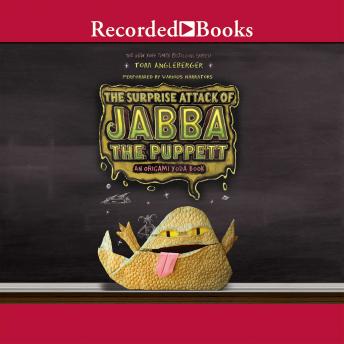 The Surprise Attack of Jabba the Puppett: An Origami Yoda Book

Dark times have fallen on McQuarrie Middle School. Dwight's back - and not a moment too soon, as the gang faces the FunTime Menace: a new educational program designed to raise students' standardized test scores. Instead, it's driving everyone crazy with its obnoxious videos of Professor FunTime and his insidious singing calculator! When Principal Rabbski cancels the students' field trip - along with art, music, and LEGO classes - to make time for FunTime, the students turn to Origami Yoda for help. But some crises are too big for Origami Yoda to handle alone: Form a Rebel Alliance the students must. United, can they defeat the FunTime Menace and cope with a surprise attack from Jabba the Puppett? With this latest episode in the explosively popular Origami Yoda series, Tom Angleberger proves once again that he 'has his finger puppet squarely on the erratic pulse of middle-school life' (Washington Post).

Surprise Attack of Jabba the Puppett: An Origami Yoda Book