Surprised at Being Alive: An Accidental Helicopter Pilot in Vietnam and Beyond 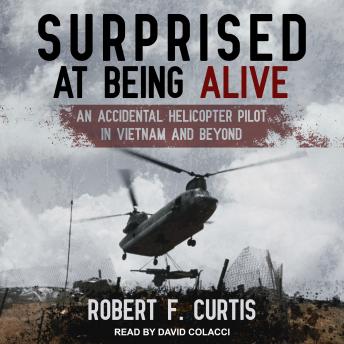 Sometimes you do everything right, but it just isn't your day. A part fails and your helicopter comes apart in flight, or, another aircraft runs into you and the pieces of both fall to the ground below, or the enemy gunner pulls the trigger at just the right moment and his rounds find your aircraft in exactly the right spot to take it out of the sky. Whichever way it happens, it wasn't your day.

Which is why, after twenty-four years and over 5,000 flight hours with four armed services, Major Robert Curtis was so surprised at being alive when he passed his retirement physical. Starting with enlisting in the Army to fly helicopters during Vietnam, and continuing on through service with the National Guard, Marine Corps, and Royal Navy, he flew eight different helicopters-from the wooden-bladed OH-13E, through the Chinook, SeaKnight, and SeaKing, in war and peace around the world. During that time over fifty of his friends died in crashes, both in combat and in accidents, but somehow his skill, and not an inconsiderable amount of luck and superstition, saw him through.

Surprised at Being Alive: An Accidental Helicopter Pilot in Vietnam and Beyond