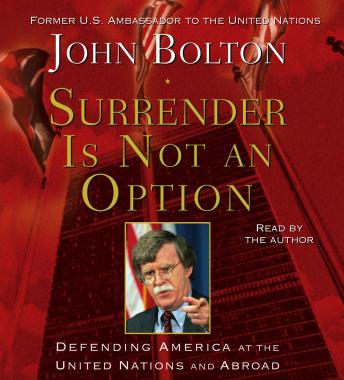 Surrender is Not an Option: Defending America at the United Nations and Abroad

With no-holds-barred candor, Donald Trump's new National Security Adviser and former ambassador to the United Nations takes us behind the scenes at the UN and the US State Department and reveals why his efforts to defend American interests and reform the UN resulted in controversy. He also shows how the US can lead the way to a more realistic global security arrangement for the twenty-first century and identifies the next generation of threats to America.

In this revealing memoir, John Bolton recounts his appointment in 2005 as Ambassador to the United Nations, his headline-making Senate confirmation battle, and his sixteen-month tenure at the United Nations. Bolton offers keen insight into such international crises as North Korea's nuclear test, Iran's pursuit of nuclear weapons, the genocide in Darfur, the negotiation that produced the controversial end of hostilities between Israel and Hezbollah, and more. Chronicling both his successes and frustrations in taking a hard line against weapons-of-mass-destruction proliferators, terrorists, and rogue states such as North Korea and Iran, he also exposes the operational inadequacies that hinder the UN's effectiveness in international diplomacy and its bias against Israel and the United States. At home, he criticizes the bureaucratic inertia in the US State Department that can undermine presidential policy.

This fascinating chronicle of the career of one of America's outstanding statesmen who has fought to preserve American sovereignty and strength at home and abroad now contains a new afterword, 'Challenges for the Next President.'

Surrender is Not an Option: Defending America at the United Nations and Abroad