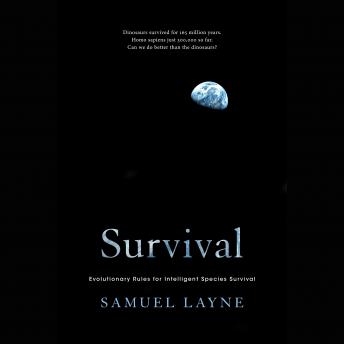 How different might the history of our species have been had our hunter-gatherer forebears failed to migrate out of Africa in time to survive 70,000 years ago when threatened by extinction due to climate change brought on by the last ice age? Simply put, we would not exist. Now, similarly threatened, we too must act quickly if we hope to survive. Yet despite all the signs of a potential greenhouse mass extinction, again due to climate change, this threat is still being ignored.

Like the passengers aboard the Titanic, who knew that in two hours and forty minutes they would either be in a lifeboat or drowning in the cold waters of the Atlantic but waited a full hour before taking action-we too are not getting our lifeboats ready.

This book is a wake-up call and looks to evolution itself for guidance on how to avoid extinction.

Evolution, the author claims, seems firmly on the side of survival and has left Evolutionary Survival Patterns-Adapt, Innovate, Mature, and Migrate to Survive or go Extinct. Survival depends on how we adapt and innovate as well as on whether we can mature and migrate. Unfortunately, misuse of the Adapt and Innovate patterns over the last two hundred years has driven us to the brink of self-extinction. What can be done?

Survival, this book claims, will not emerge from the products of adapting and innovating-science, technologies, and inventions-but by migrating and maturing to evolutionary maturity-maturing beyond the ability to drive ourselves and other species to extinction-and by restoring Earth's habitats, species and a return to sustaining our lives from within Earth's ecosystems, as our forebears did. And failing these, like them, we must be free, willing, and able to choose to migrate-to other planets if necessary-to survive.