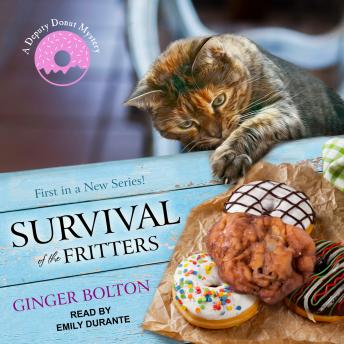 Survival of the Fritters

If Emily has learned anything from her past as a 911 operator, it's to stay calm during stressful situations. But that's a tall order when one of her regulars, Georgia Treetor, goes missing. Georgia never skips morning cappuccinos with her knitting circle. Her pals fear the worst-especially Lois, a close friend who recently moved to town. As evening creeps in, Emily and the ladies search for Georgia at home. And they find her-murdered among a scattering of stale donuts . . .

Disturbingly, Georgia's demise coincides with the five-year anniversary of her son's murder, a case Emily's late detective husband failed to solve before his own sudden death. With Lois hiding secrets and an innocent man's life at stake, Emily's forced to revisit painful memories on her quest for answers. Though someone's alibi is full of holes, only a sprinkling of clues have been left behind. And if Emily can't trace them back to a killer in time, her donut shop will end up permanently closed for business . . .

Survival of the Fritters