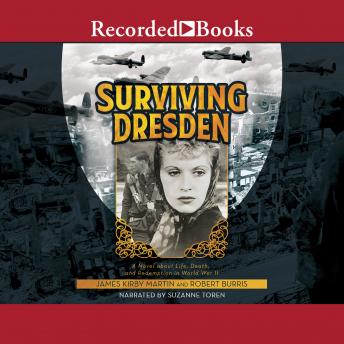 Surviving Dresden: A Novel about Life, Death, and Redemption in World War II

Surviving Dresden beautifully portrays the poignant and inspiring human struggle between good and evil in the search for peace during the last bloody days of World War II. On the ground that horrific night is a courageous young Jewish woman, Gisela Kauffmann. Having just received orders to be herded off to a concentration camp, Gisela will do anything to save herself and her family. In the air, RAF bomber Captain Wallace Campbell is torn between his sworn military duty to bomb an unarmed city crowded with refugees, and his growing conviction that total war is immoral. Surviving Dresden is told through the eyes of Gisela, Wallace, and a compelling cast of characters-a story of personal pain and suffering amid the hope, even as the bombs are falling, of restoring human sanity to a world torn apart. Masterfully sweeping, Surviving Dresden explores the depths of human courage in facing life and death, with human redemption triumphing.

Surviving Dresden: A Novel about Life, Death, and Redemption in World War II