Surviving Katyn: Stalin's Polish Massacre and the Search for Truth 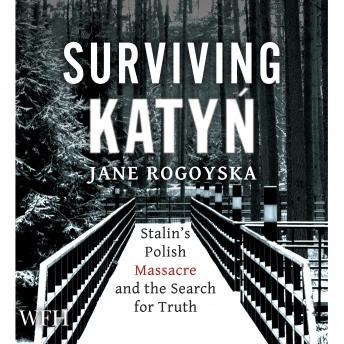 The Katyn Massacre of 22,000 Polish prisoners of war is a crime to which there are no witnesses.

Committed in utmost secrecy in April–May 1940 by the NKVD on the direct orders of Joseph Stalin, for nearly fifty years the Soviet regime succeeded in maintaining the fiction that Katyn was a Nazi crime, their story unchallenged by Western governments fearful of upsetting a powerful wartime ally and Cold War adversary. Surviving Katyn explores the decades-long search for answers, focusing on the experience of those individuals with the most at stake – the few survivors of the massacre and the Polish wartime forensic investigators – whose quest for the truth in the face of an inscrutable, unknowable, and utterly ruthless enemy came at great personal cost.

“A gripping reconstruction of one of the most gruesome and haunting crimes of the Second World War. Jane Rogoyska's sensitive yet dispassionate use of the harrowing evidence provided by victims, perpetrators and survivors makes for utterly compelling reading, and lays bare its toxic legacy.” ADAM ZAMOYSKI, author of Poland: A History

“A well-researched and beautifully written narrative of the appalling fate of the Polish officers captured by the Soviets in 1939 and massacred in 1940. Through the testimony of the few survivors and the investigators, Jane Rogoyska brings to life the suffering of the Poles which continued for decades after the war as Soviet culpability for the crime was denied across the world.” HALIK KOCHANSKI, author of The Eagle Unbowed

Surviving Katyn: Stalin's Polish Massacre and the Search for Truth