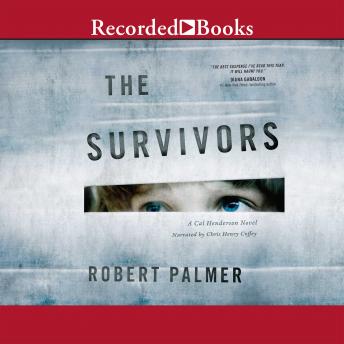 THE SURVIVORS will be the first book in a proposed mystery series featuring Cal Henderson, a Washington D.C. psychologist with a traumatic past of his own: when he was eight years old, his mother killed his father and his two brothers in a murder suicide. As the twenty-fifth anniversary of the event coincides with the arrival of a strange new patient and a drastic increase in Cal's previously-controlled psychological symptoms, Cal feels compelled to trace his mother's last days. In his search for answers he uncovers secrets about his mother's life involving a defense contractor's dark dealings, a nominee for U.S. Attorney with a questionable past, and a shady corporate billionaire whose sphere of influence seems to include everyone from The Pentagon on down. Meanwhile, as Cal gets closer to discovering the truth, recovered memories of the tragic events of his childhood push him into a psychological tailspin. The author, a longtime lawyer in Washington D.C., has several ideas for additional books involving Cal's patients, all of whom will have some connection to the federal investigative or political world. The proposed sequel, JUSTICE LEEDS, centers around a Supreme Court Justice who may be involved in the disappearance of a young woman with whom he's been having an affair. The series also promises additional emotional tension owing to Cal's interest in both his office manager and a female FBI agent introduced in THE SURVIVORS. The insider view of Washington politics will appeal to fans of beltway thrillers. And of course the 'psychologist as protagonist' recipe has proven to be a success: obviously Patterson's Alex Cross, but also more recently in Michael Robotham's Joseph O'Loughlin series set in England. And yet Palmer's protagonist, who is not just a crime therapist but is also plagued by his own psychological problems, is a breed of his own. Diana Gabaldon, author of the award-winning, #1 NYT-bestselling Outlander novels provided this terrific early blurb: 'Do you think you know what your own mother might do? The Survivors is an up-close and personal mystery - the best I've read this year. It will haunt you.' About the Author: R.L. Palmer Bob Palmer is a practicing attorney in Washington, D.C. He has represented U.S. and foreign businesses in acquisition and divestiture matters, tax and regulatory controversies before federal agencies and the federal courts, and in legislative matters pending before Congress. His clients have included major oil companies and banks, shipping companies, and international charitable organizations. Bob has served as a professor at a number of law schools, including Rutgers (Camden) and the University of Colorado. He was the first male to teach a course in feminist legal theory at an American law school (Santa Clara University). He currently teaches Law & Anthropology at The George Washington University Law School, and teaches family property law at Georgetown University Law Center. Bob lives in Northern Virginia with his wife and son. THE SURVIVORS is his first novel. He is currently at work on a sequel.