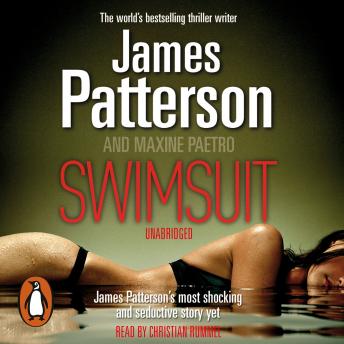 A beautiful life. A terrible death?

A breathtakingly beautiful supermodel disappears from a swimsuit photo shoot at the most glamorous hotel in Hawaii. Only hours after she goes missing, Kim McDaniels' parents receive a terrifying phone call. Fearing the worst, they board the first flight to Maui and begin the hunt for their daughter.

Ex-cop Ben Hawkins, now a reporter for the LA Times, gets the McDaniels assignment. The ineptitude of the local police force defies belief - Ben has to start his own investigation for Kim McDaniels to have a prayer ... and for Ben to have the story of his life.

All the while, the killer sets the stage for his next production. His audience expects the best - and they won't be disappointed. Swimsuit is a heart-pounding story of fear and desire, transporting you to a place where beauty and murder collide and unspeakable horrors are hidden within paradise.

'Billed as one of his scariest yet. It terrified me rigid - but there was no way in a million years I could put it down ... utterly compulsive' Daily Express

'The thriller genre's leading goal scorer ... Pulp fiction at its most moreish' Shortlist

'His usual brilliant blend of pace and intrigue' Mirror

This title is due for release on June 4, 2009
We'll send you an email as soon as it is available!