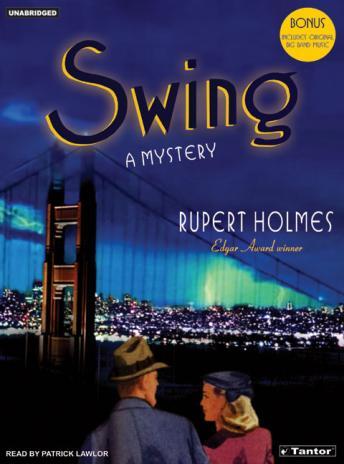 Two-time Edgar Award winner Rupert Holmes-author of the critically acclaimed Where the Truth Lies and creator of the Tony Award-winning musical whodunit The Mystery of Edwin Drood-now fuses gripping suspense and evocative music in an innovative novel of intrigue set in 1940, during the very heart of the Big Band era. Swing is a multimedia experience, it contains musical tracks which give clues to the mystery.

Jazz saxophonist and arranger Ray Sherwood, touring with the Jack Donovan Orchestra, is haunted by personal tragedy. But when a beautiful and talented Berkeley student named Gail Prentice seeks his help in orchestrating a highly original composition called Swing Around the Sun, which is slated to premiere at the Golden Gate Exposition on the newly created Treasure Island in San Francisco Bay, Ray finds himself powerfully drawn to the beguiling coed. Within moments of first setting eyes on her, Ray also witnesses a horrifying sight: a young woman plunging to her death from the island's emblematic Tower of the Sun.

As the captivated Ray learns more about Gail and her unusual family, he finds himself trapped in a tightening coil of spiraling secrets- some personally devastating, all dangerous and deadly- in which from moment to moment nothing is certain, including Gail's intentions toward him and her connection to the dead woman who made such a grisly impact upon the stunning island. As events speed toward a shocking climax, Ray must use all his physical daring and improvisational skills to unlock an ominous puzzle whose sinister implications stretch far beyond anything he could imagine.

Swing is a brilliant historical thriller-with an extra twist that extends beyond its pages. Accompanying the novel is a CD of original songs and music that feature prominently in the story, within which the reader may find additional clues to the mysteries of Swing.

This title is due for release on May 15, 2005
We'll send you an email as soon as it is available!