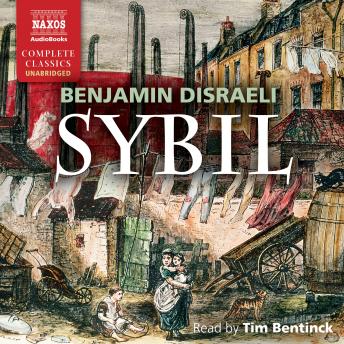 In Sybil, or The Two Nations, social activist, political reformer and twice Prime Minister Benjamin Disraeli tells the love story of a young working-class woman and a newly elected nobleman. While on a visit to the manufacturing towns of the north, aristocrat Charles Egremont encounters beautiful Sybil Gerard, singing in the grounds of Marney Abbey. Graceful and angelic, Sybil Gerard is a symbol of religious purity. He also meets her father, a working-class radical, who tells him about the division of England into two nations: the rich and the poor. Moved by the episode, Egremont investigates the conditions of the working poor and witnesses the disturbing after-effects of the Industrial Revolution. He attempts to address the deep disparity, while falling increasingly in love with Sybil; however, his courtship is pitted against growing political unrest and violence caused by the calamitous two-nation divide.