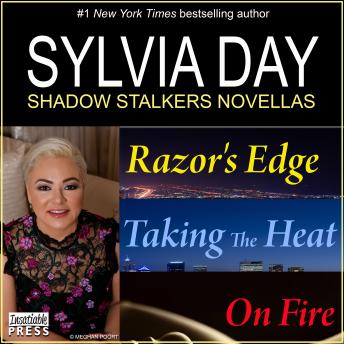 From the #1 New York Times bestselling author of the Crossfire novels comes a collection that includes three novellas from her Shadow Stalker series—where deputy US Marshals fight for what’s right and indulge in what’s sinful... In Razor’s Edge, Deputy US Marshal Jack Killigrew can’t stop thinking about his best friend’s widow, Rachel. He promised to protect her, but giving into his desire could betray his buddy’s memory—unless Rachel wants the same thing... In Taking the Heat, Layla Creed is ready to testify in a sensational murder trial, but doing so would take her out of Deputy US Marshal Brian Simmons’s life forever. They have the option of going on the run, but a stranger in the shadows could force them to risk everything in the name of love... In On Fire, things are getting hot between Deputy US Marshal Jared Cameron and fire inspector Darcy Michaels. But a secret from Darcy’s past could draw them into the flames... Razor’s Edge previously appeared in The Promise of LoveTaking the Heat previously appeared in Men Out of UniformOn Fire previously appeared in Hot in Handcuffs