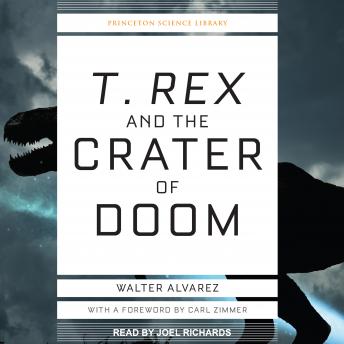 T. Rex and the Crater of Doom

Sixty-five million years ago, a comet or asteroid larger than Mount Everest slammed into the Earth, inducing an explosion equivalent to the detonation of a hundred million hydrogen bombs. Vaporized detritus blasted through the atmosphere upon impact, falling back to Earth around the globe. Disastrous environmental consequences ensued: a giant tsunami, continent-scale wildfires, darkness, and cold, followed by sweltering greenhouse heat. When conditions returned to normal, half the plant and animal genera on Earth had perished.

This horrific chain of events is now widely accepted as the solution to a great scientific mystery: what caused the extinction of the dinosaurs? Walter Alvarez, one of the Berkeley scientists who discovered evidence of the impact, tells the story behind the development of the initially controversial theory. It is a saga of high adventure in remote locations, of arduous data collection and intellectual struggle, of long periods of frustration ended by sudden breakthroughs, of friendships made and lost, and of the exhilaration of discovery that forever altered our understanding of Earth's geological history.

T. Rex and the Crater of Doom