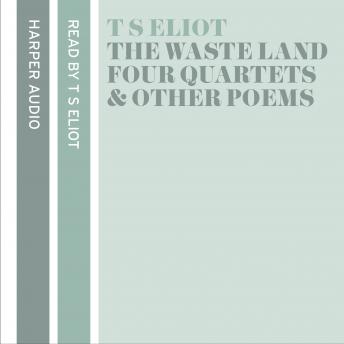 The most famous, beautiful and spiritually moving poems of the twentieth-century, read by the most famous poet. Historic recordings of the cream of Eliot's poetry.

It is always something of a revelation to listen to a poet reading his own words, and these recordings are no exception. Eliot clearly and evenly characterises and reveals the voices of some of his most important works in this excellent reading.

The Waste Land caught the imagination of the age with its powerful emotional impact. Eliot felt that the modern Western
city had become a sterile desert waste land, and in it life had become a sham pretence, with no content but stale conventionality.

The Four Quartets express the poet's whole-hearted acceptance of the Christian faith. Each poem describes a meditation which leads to a reconciliation with the burden of the past.