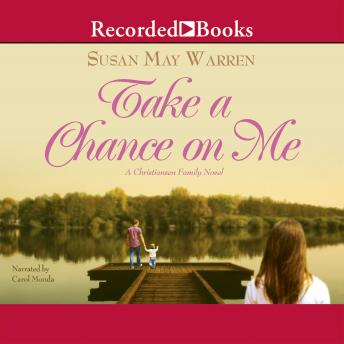 Take a Chance on Me

Darek Christiansen is almost a dream bachelor-- oldest son in the large Christiansen clan, heir to their historic Evergreen Lake Resort, and doting father. But he' s also wounded and angry since the tragic death of his wife, Felicity. No woman in Deep Haven dares come near. New assistant county attorney Ivy Madison simply doesn' t know any better when she bids on Darek at the charity auction. Nor does she know that when she crafted a plea bargain three years ago to keep Jensen Atwood out of jail and in Deep Haven fulfilling community service, she was releasing the man responsible for Felicity' s death. All Ivy knows is that the Christiansens feel like the family she' s always longed for. And once she gets past Darek' s tough exterior, she finds a man she could spend the rest of her life with. Which scares her almost as much as Darek learning of her involvement in his wife' s case. Caught between new love and old grudges, Darek must decide if he can set aside the past for a future with Ivy-- a future more and more at risk as an approaching wildfire threatens to wipe out the Christiansen resort and Deep Haven itself.

Take a Chance on Me

This title is due for release on August 2, 2013
We'll send you an email as soon as it is available!