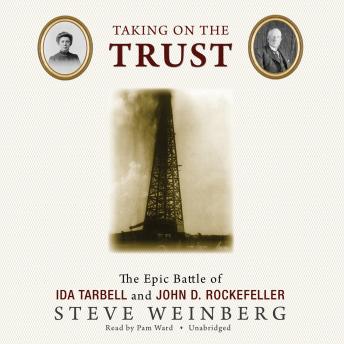 Taking on the Trust: The Epic Battle of Ida Tarbell and John D. Rockefeller

Long before the rise of megacorporations like Walmart and Microsoft, Standard Oil controlled the oil industry with a monopolistic force unprecedented in American business history. Undaunted by the ruthless power of its owner, John D. Rockefeller, a fearless and ambitious reporter named Ida Minerva Tarbell confronted the company known simply as “The Trust.” Through her peerless fact gathering and devastating prose, Tarbell pioneered the new practice of investigative journalism. Her shocking discoveries about Standard Oil and Rockefeller led to a dramatic confrontation that culminated in the landmark 1911 Supreme Court antitrust decision, forever altering the landscape of modern American industry. Based on extensive research, Taking on the Trust is a vivid and dramatic history of the Progressive Era with powerful resonance for the early twenty-first century.