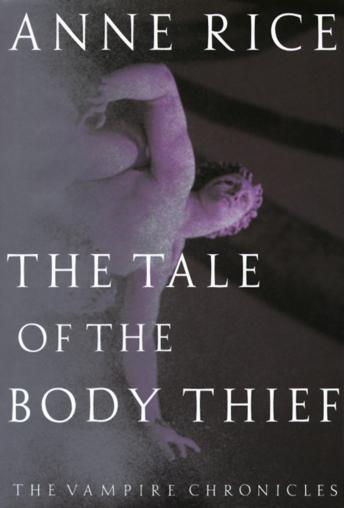 The Tale of the Body Thief

NATIONAL BESTSELLER • In another feat of hypnotic storytelling, Anne Rice continues the extraordinary Vampire Chronicles that began with the now classic Interview with the Vampire and continued with The Vampire Lestat and The Queen of the Damned.

Lestat speaks.  Vampire-hero, enchanter, seducer of mortals.  For centuries he has been a courted prince in the dark and flourishing universe of the living dead. Lestat is alone.  And suddenly all his vampire rationale--everything he has come to believe and feel safe with--is called into question. In his overwhelming need to destroy his doubts and his loneliness, Lestat embarks on the most dangerous enterprise he has undertaken in all the danger-haunted years of his long existence.

The Tale of the Body Thief is told with the unique—and mesmerizing—passion, power, color, and invention that distinguish the novels of Anne Rice.

The narrator did a great job!

Amazing copy of the book, the narrator did a amazing Job

This was my least favorite of the Vampire Chronicles series so far. I did not like that it was an abridged version, but I could not find an unabridged version. I felt like I could really tell when parts were cut out and the story seemed very disjointed at times because of that. The narrator over acted a bit too much; I much prefer the narrator of the previous three books. Especially when he did Louis' voice, it was almost ridiculous. It might just be personal preference, but I hated the way he made Louis sound, which further hindered my enjoyment of the story. At least it was short and easy to get through.

better then I thought it would be. A nice in between, short Lestat story. Narrator is great.

This has to be the abridged version but it doesn't say it any where if you are a fan you will notice some of the best parts left out. Example; they cut out the part with Marius. Skip it. Read the book it's better.

This book moves along fast so you must pay attention. I thought it was good, short and to the point.

Took a really long time to become interesting. Least favorite so far but not bad, just a real slog to get into.